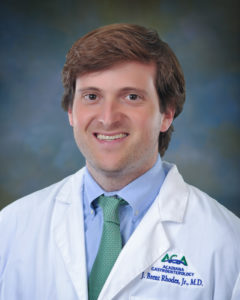 John Brent Rhodes, Jr., was born and raised in Baton Rouge, Louisiana. He attended Catholic High School followed by Louisiana State University where he earned both Bachelor and Master of Science Degrees. He then attended the School of Medicine at Louisiana Health Sciences Center in New Orleans where he earned his Doctorate of Medicine.

Dr. Rhodes and his wife Brooke have three children, Emmeline, John Brent, and Catherine. In his spare time, he enjoys spending time with his family, cooking, the outdoors, and playing piano, which has been a lifelong interest.