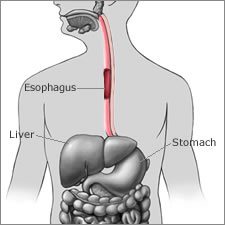 Barrett’s esophagus is a condition that affects the lower portion of the esophagus which is the tube connecting the mouth to the stomach. Barrett’s esophagus affects about one percent of adults in the United States and is twice as common in men as in women.

Although rare, people with Barrett’s esophagus have an increased risk of developing esophageal cancer.

To diagnose Barrett’s esophagus your gastroenterologist will conduct an endoscopic exam. An endoscope is a thin tube with a video camera in it that can be passed through your mouth into your esophagus and stomach.

The endoscopic exam will allow your gastroenterologist to closely examine your esophagus to detect any developing abnormalities or signs of damage, as well as taking a biopsy or tissue sample for further evaluation.

If Barrett’s esophagus is identified during the endoscopy, then there are several treatment options available. In some cases, when no precancerous cells are identified, treating the underlying cause such as GERD is sufficient. Where cell changes (high-grade dysplasia) that are likely to lead to cancer are identified, surgical treatments using laser or other high energy methods to destroy precancerous cells may be recommended.

If you would like more information about Barrett’s esophagus, then please contact us to schedule an appointment.