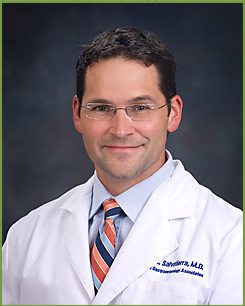 Dr. Salvatierra is Board Certified by The American Board of Internal Medicine in both Internal Medicine and Gastroenterology. He has presented research findings at national digestive conferences and has co-authored published articles relating to Inflammatory Bowel Disease and the evaluation of Helicobacter Pylori.

Dr. Salvatierra has been in practice with Acadiana Gastroenterology Associates since 2010, and provides service to his patients at Acadiana Endoscopy Center, Lafayette General Medical Center Hospital and Our Lady of Lourdes Hospital. He enjoys traveling, the outdoors, and spending time with his wife Madeline and their children.