Gastroesophageal Reflux Disease (GERD) occurs when food and digestive juices from the stomach flow backward into the esophagus, which is the tube connecting the mouth and stomach. This backflow of acidic stomach contents irritates the esophagus often causing it to become inflamed, and results in uncomfortable symptoms commonly referred to as acid reflux, heartburn or indigestion.

While most people experience symptoms of acid reflux and heartburn at some time or another, symptoms occurring more than twice each week or that disrupt your daily activities indicate a more serious condition usually referred to as gastroesophageal reflux disease or GERD. 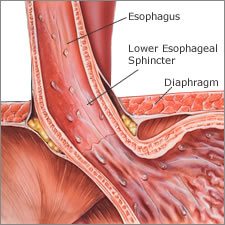 GERD develops as a result of acid and bile that back up from the stomach, causing the esophagus to become irritated or inflamed. Hydrochloric acid is naturally produced by the stomach to aid in the process of digesting food. The lining of the stomach is designed to resist irritation by the acid, but the esophagus is not. When stomach acid begins to make frequent contact with the esophagus, damage can occur to the esophageal lining.

Gastroesophageal reflux disease often occurs as a result of a weakened, damaged, or structurally abnormal lower esophageal sphincter or LES. It may also be associated with other conditions such as hiatal hernia, obesity, or pregnancy. The LES is a ring of muscle at the connection of the esophagus and stomach responsible for keeping acidic contents in the stomach. Normally, the LES relaxes as you swallow to permit food and liquid into your stomach. Once the food has passed, the sphincter is designed to tighten immediately to prevent any acid from emerging upwards out of the stomach. If the sphincter weakens or develops an abnormality, then acid is able to migrate into the esophagus more easily, resulting in heartburn and eventual damage to the esophageal tissue.

The primary symptoms of gastroesophageal reflux disease among adults are frequent heartburn and acid reflux. Heartburn caused by GERD is often increased by bending, stooping, lying down, or eating.

It is possible for your gastroenterologist to diagnose GERD based on the presence of your symptoms alone. Your physician may recommend a number of tests or procedures to confirm the diagnosis, or to further evaluate your esophagus for any damage or abnormalities.

Common tests used to diagnose GERD include an upper GI series x-ray, an upper endoscopy, and a pH test to gage the frequency of your acid reflux and the amount of acid present in your esophagus.

If you are exhibiting symptoms of GERD, then your gastroenterologist will provide you with instructions concerning lifestyle habits that you may wish to alter, such as tobacco use, avoiding certain foods, and diet and exercise habits.

Treatment for GERD generally includes over-the-counter or prescription medications including antacids, h-2 receptor blockers that reduce acid production, and proton pump inhibitors that block acid production and provide the esophageal tissue with an opportunity to heal.

Surgical treatment for GERD is only pursued after symptoms persist despite lifestyle changes and medication, and is used to repair and strengthen the damaged lower esophageal sphincter so to prevent the frequent occurrence of acid reflux. Your gastroenterologist will provide you with any information concerning surgical options for GERD if it is determined that it would be beneficial to you.

For more information about gastroesophageal reflux disease please contact us to schedule an appointment.

Stretta® Therapy is a minimally invasive treatment for GERD using radiofrequency energy to treat the muscle of the esophagus, remodeling the tissue, resulting in improved symptoms and a reduction or elimination of medication. More information on Stretta®