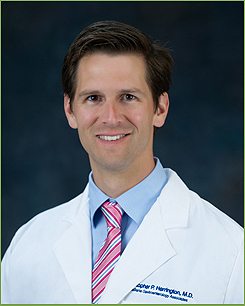 He remained at Tulane University and completed his Fellowship in Gastroenterology and was appointed Chief Fellow by the Tulane faculty. During Fellowship, he received extensive training in all aspects of Gastroenterology. He spent extra time during his training focusing in Hepatology, Inflammatory Bowel Diseases, and Motility Disorders. His research interests include Advanced Liver Diseases and Inflammatory Bowel Disease Dr. Herrington is Board certified by The American Board of Internal Medicine.

Dr. Herrington married his high school sweetheart, A’Dair Williams Herrington, who is also a practicing physician in Lafayette and they have three small children, Camille, David, and Carter. Dr. Herrington is an accomplished triathlete and tennis player and enjoys cooking, traveling, swimming, biking, and spending time with his family.